Wales must join forces with others to ensure ‘no countries are left behind’ in climate change efforts, pledges Lesley Griffiths at COP25 in Madrid

Wales must join forces with states and regions to ensure ‘no countries are left behind’ in efforts to combat the long-term effects of climate change, Minister Lesley Griffiths has pledged at COP25 in Madrid today (7 December).

Speaking at the Under2 Coalition General Assembly on Saturday, she outlined how the Future Fund has made significant progress over the last year supporting developing and emerging economy regions decarbonise through sustainable development.

She stressed how collaboration was essential to success, as climate change required everyone to work together ‘across geographic and sectoral boundaries’.

The Future Fund enables governments to accelerate the shift towards a world of under 2°C of warming, through strategic funding to support climate activities in developing and emerging economy regions, as well as providing much-needed health and socio-economic benefits.

Wales already has a track record of supporting countries tackling the impacts of climate change. The Wales for Africa programme has been planting a tree in Africa and Wales every time a child is born in Wales for the last 11 years.

The scheme has safeguarded an area of forest the Size of Wales in Africa, with the 10 millionth tree planted in Africa earlier this year.

Many of the trees have been planted in the coffee gardens of Fairtrade farmers, providing all important shade, fruit, firewood and timber.

During her speech the Minister set out the significant steps taken in Wales since the last International Conference of parties held in Poland last year, with the National Assembly the first Parliament in the world to declare a climate emergency, Wales increasing its 2050 emissions reduction target to at least 95% and having an ambition to be net zero.

Minister for Environment, Energy and Rural Affairs, Lesley Griffiths, said: “We need everyone attending this conference to ensure no countries are left behind in efforts to combat the long-term effects of climate change and strive to support developing and emerging regions decarbonise in a socially just way.

“We declared a climate emergency to trigger a wave of action at home and internationally and we have been overjoyed to see others follow in our footsteps around the world, but imagine what over 220 states and regions could achieve.” 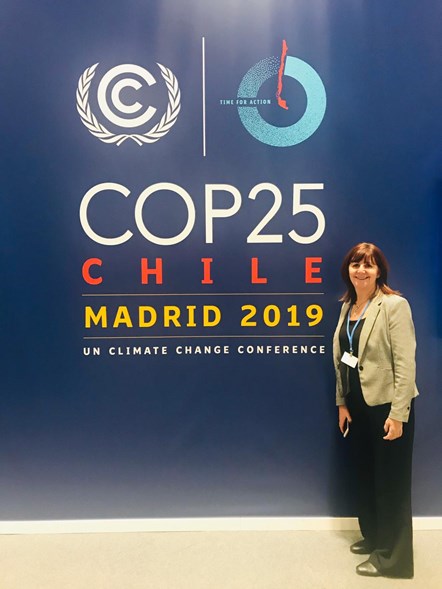