Teen becomes First Minister for the day as girls take over

A 16-year-old girl from Barry has become First Minister of Wales for the day as girls across the world take over to mark the UN’s International Day of the Girl.

Jaime has stepped into First Minister Mark Drakeford’s shoes to celebrate the power of girls and to call for action to tear down the barriers they continue to face in today’s world.

In countries around the world, girls are taking over key roles in media, business and Government today to demand equal power, freedom and representation for girls and young women.

A level student Jaime has been working with youth group in the Vale of Glamorgan to run a project, Her Voice Wales, which empowers young people to become champions of equality in their community. The group are tackling street safety and catcalling and campaigning to provide young people with more safe spaces.

As well as meeting Ministers and lawmakers, during her day as First Minister, Jaime will open the Welsh Government’s weekly press conference and participate in a meeting about hate crime alongside Minister for Social Justice Jane Hutt.

Jaime will also watch First Minister’s Questions in the Senedd before taking part in an event to celebrate Wales’ participation in the World Cup, ahead of the tournament next month.

Jaime said: “I can’t wait to be First Minister for International Day of the Girl! I look forward to taking part in the Girl’s Takeover to show the importance of seeing girls in powerful leadership roles, which I think is so important if we are going to achieve true gender equality.”

Mark Drakeford said: “I’m sure I’ll learn a lot from First Minister Jaime as she steps into my shoes for the day.

“Women and girls have the power to change the world but, all too often, they are not given the opportunity to do so.

“While I’m proud more than half of the roles in my Cabinet are filled by women, this isn’t a picture which is replicated across Wales, so we have much more work to do.

“I hope girls across Wales see what Jaime does today and are inspired to become our leaders of the future.”

Rose Caldwell, Chief Executive of Plan International UK, says: “It is truly inspiring to see Jaime take over the role of First Minister for Wales today, on the tenth anniversary of International Day of the Girl, and exciting to see such a strong signal from the First Minister of his commitment to equal power and gender equality.

“Girls tell us they want a seat at the table, and to participate in political conversations in a meaningful way. But all too often they are undervalued, undermined, and underestimated. It's high time that changed.

“Alongside Jaime, we call on leaders of all types to consider what they can do to recognise and value the power of girls’ voices - a crucial step if we are to achieve gender equality in Wales and beyond.” 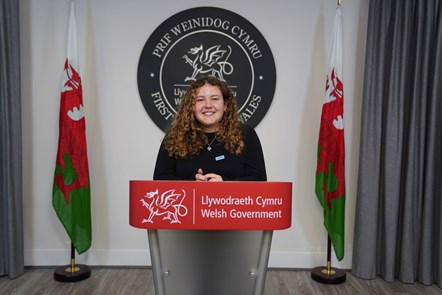