Young people to have their voices heard

This Universal Children’s Day [20th November] young people from across Wales will meet with Ministers from across Welsh Government to have their voices heard.

The annual Young Wales Conference is a chance for young people to speak directly to Ministers about issues that matter to them.

Designed and organised by the members of the Young Wales Project Board, the event will feature discussions and workshops on a variety of topics including; climate change, mental health and well-being and equality and diversity. Each session will be joined by 15-20 young people from a diverse range of backgrounds and experiences from across Wales.

The Welsh Government adopted the United Nations Convention on the Rights of the Child (UNCRC) in 2004. As part of this commitment to promoting children’s rights Welsh Government pledged to take into account the views of young people when making policy and decisions that affect them.

“We have continually put children and young people are at the heart of our policy making and have led the way on Children’s Rights. Conferences like the one today demonstrate our clear commitment to ensuring their voices are heard at the heart of government. By hearing first-hand the concerns and issues that affect children we can better make decisions which benefit future generations.

“I look forward to working with young people on issues which matter to them and working across government to embed these views into policy.”

“It is vitally important for us to listen to the views of children and young people. That’s why I am looking forward so much to these discussion sessions.

“Wales’ youth have a strong role in shaping our policies and ideas, as we work to deliver a fairer, greener, ever more successful Wales.”

“The Young Wales conference allows a diverse range of young people to talk to Ministers about solving some of the biggest issues. Climate Change, Equality, Diversity and Inclusion and Mental Health and Wellbeing are priorities for young people and we have the ideas that will make a positive difference to our lives.”

The Young Wales Project Board is part of the Children in Wales.

Ellie Morgan said: “The three themes of the conference are very important for so many young people and the conference lets us have a say on the issues that affect us. We don’t know enough about children’s rights and we should know more and how it applies to us. For people who think that children won’t make a difference - you are wrong. You might try to take away our voices, but you won’t take away our future.”

Joshua Hollett said: “Every child has the right to access information and they should know about children’s rights. We should be given more time and opportunities to discuss with people in power about how we can change some of the issue in the themes together and the conference allows us to do this.” 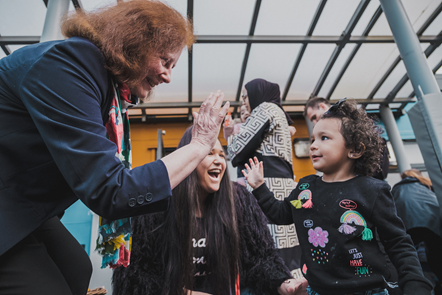