'Wales in Germany 2021' is a celebration of our historic ties that won’t falter because of Brexit. First Minister Mark Drakeford

Welcoming in the New Year, Welsh First Minister Mark Drakeford announced plans for a year of activity to celebrate and strengthen the historic ties between Wales and Germany.

‘Wales in Germany 2021’ will highlight a themed year of activity to showcase the relationship between Germany and Wales with events taking place throughout the year. The planned events will highlight Wales and Germany’s business networks, cultural ties and other partnerships. These events begin the Welsh Government’s renewed push to increase Wales’ international profile and increase collaboration post-EU membership.

First Minister Mark Drakeford will begin the year of celebration by virtually meeting with the German Ambassador to the UK, Herr Andreas Michaelis on Monday 11 January.

“Our already deep ties with Germany have grown ever stronger, and now, more than ever, we want to celebrate these ties and see them flourish. We are not a nation defined by Brexit, but a nation that has always been outward looking, internationalist and welcoming.

“I’m delighted that we’re beginning 2021 with a celebration of our close historical ties between Wales and Germany. It’s a celebration of not just our economic ties to a major European ally, but of culture and globalisation. Our two nations have always worked closely together across a number of areas such as science, education and innovation as well as culture, tourism and the arts, and we have every intention that these close ties will continue to prosper.”

As part of celebrating ‘Wales in Germany 2021’ Deputy Minister and Chief Whip Jane Hutt will attend a virtual panel event with the German diaspora in Wales, along with the Helga Rother-Simmonds, the German Honorary Consul to Wales, Professor Colin Riordan, President and Vice Chancellor at Cardiff University, on Monday 11 January.

The First Minister finished by saying:

“Many Welsh people call Germany their home and many Germans have chosen Wales to be theirs. From the firefighters of Ravensburg to the communities of Rhondda Cynon Taf, towns and cities across our nations are twinned and friendships have been forged. These ties will prosper, and as Wales starts a new journey on the world stage, we have made it clear that we’re open for business, that we are welcoming to new opportunities and our bonds of friendship remain steadfast.

“We may have left the EU, however, the cultural and historical ties between Wales and our European partners will never be broken.” 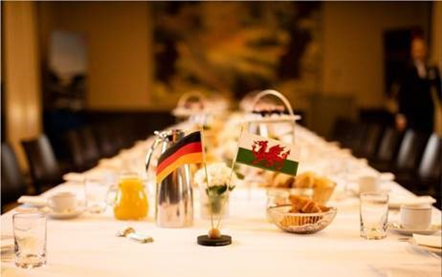