To celebrate St David’s Day and the launch of the first ever Wales Week in Ireland (9th-13th March), well-known Irish and Welsh artists, Sean Corcoran and Marc Treanor have come together for the first time to create artwork on the shores of both Wales and Ireland.

Each piece of sand art depicts a Red Kite bird, which is often considered the national bird of Wales, to symbolically represent the cultural connection between the two nations.

Sean Corcoran created his Red Kite using a garden rake over 4 hours on Kilmurrin Beach in Co. Waterford, and Marc Treanor mastered his over 5 hours on Whitesands Bay in St David’s, also using a rake with a string and stick technique.

The Red Kite bird of prey was close to becoming extinct but was saved from national extinction by one of the world’s longest running protection programmes and now the species is thriving in both Wales and Ireland.

Kites are currently being exported from Wales, over to Ireland, as part of a reintroduction programme and they can now be seen for the first time in over 200 years in Ireland.

The art work has been commissioned to celebrate the first Wales Week in Ireland, which takes place from 9th – 13th March in a specially created 360 immersive digital Dome in Dublin’s CHQ in celebration of the unique cultural connections that exist between Ireland and Wales. The programme will span the areas of arts, culture, music, language and youth issues to name but a few.

To find out more about Wales Week visit https://walesweekdublin.thinkorchard.com/ 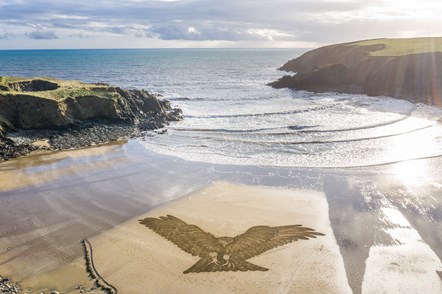