A pilot scheme tackling food poverty and holiday hunger will return again this year – with Welsh Government funding increasing from £100,000 to £1m.

The Deputy Minister for Health and Social Services, Julie Morgan, has today (February 5th) confirmed the scheme will return and announced additional funding for this year’s provision. Funding will be offered to all local authorities in Wales.

The pilot which ran in 2019, provided over 13,000 meals across 98 sites, during the school summer and October half term holidays. This year the scheme will be able to run in all holidays from Easter 2020 to February half term 2021. It’s hoped that tens of thousands more children will be fed thanks to the extra funding.

An evaluation of the pilot published today, shows that nearly half of the children surveyed said they felt less hungry after attending a Holiday Hunger session. Many also said they tried new foods, and nearly one in four children said they ate more fruit and vegetables. Alongside providing food the evaluation found that children drunk more water, exercised more and nearly three quarters said they tried a new activity.

Julie Morgan, Deputy Minister for Health and Social Services, said: “School holidays can bring many challenges to families. The Holiday Hunger pilot has shown how bringing together nutritious food and rich play opportunities can have a positive effect on children. The pilot has proven to be a successful and I’m delighted that we have been able to increase the funding to £1m, which means this year we can help even more families across Wales.”

One project which benefited from last year’s holiday hunger pilot is Swansea based Faith in Families, they said “Being able to offer healthy and nutritious food during the holiday sessions enabled us to alleviate some of the stress put on families during the school holidays. The holidays can be a stressful time, with the added worry of money some families find it hard to cope. Being part of the holiday hunger initiative helped so many families. In the summer last year in Bonymaen alone we had 56 children accessing our play scheme sessions, offered 194 places just throughout August. We were also able to offer 15 family sessions were we provided 191 meals over the summer”.

In Denbighshire Holiday Hunger helped to support the local community through the Denbighshire Play and Community Housing teams, who provided a variety of play activities and games to engage children and families during the half term. This included providing healthy lunches for each child. 60 healthy lunches were provided across all three sessions which were held in 2 community play areas in Rhyl and 1 in Rhuallt. 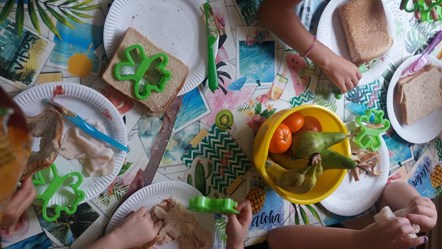