Wales became the first UK nation to pass legislation to lower the default national speed limit on residential roads and busy pedestrian streets from 30mph to 20mph when the Senedd voted in favour in July this year.

Work is now underway to get Wales ready for the change, with the new speed limit coming into force on 17 September 2023.

Here are seven things you may not have known about the new 20mph default speed limit:

The evidence is clear – decreasing speed limits reduces collisions and saves lives. Previous research has shown that there are 40% fewer collisions in areas with 20mph compared with 30mph. In Wales, it has been estimated that with widespread introduction of 20mph, 6–10 lives would be saved and 1200–2000 casualties avoided each year. The value of preventing these casualties is between £58M–£94M each year.

As well as making collisions less severe when they do happen, the slower speed also increases the chances of avoiding a collision in the first place, in turn reducing the burden on the NHS. Prevention is better than cure!'

People living in communities where 20mph is already the default speed limit are positive about the change. Evidence from a survey conducted on behalf of the Welsh Government showed that 80% of people supported a 20mph speed limit in their area – that’s four in five adults. And in places across the UK where 20mph has been put in place, support has increased after implementation.

Whatever car you have, getting to 30mph requires more than twice as much energy as getting to 20mph. In fact, evidence suggests that as a result of smoother driving styles, reducing braking and acceleration, improved traffic flow, and possible reductions in fuel consumption, 20mph produces less air pollution than 30mph. People surveyed say that traffic speed is a barrier to walking and cycling for short journeys, so by lowering the speed limit, we’re helping to create safer, quieter, and more pleasant environments where people feel safer to walk and cycle, further reducing air pollution and benefiting people’s health and the local economy. Welsh communities will become better places to live.

30mph speed limits for residential areas were set before World War II, when there were far fewer cars on the roads and speed limits were set without the wealth of research and data that we have now. Research indicates that the majority of drivers observe speed limits on residential streets, with findings from speed monitoring work in one of the pilot 20mph schemes in Wales showing that only around 6% of drivers required enforcement action to be taken against them, in the form of advice, a speed education course or other action.

Currently 30mph is the default speed limit for streets with street lighting, but there are variations to that limit marked by signs on the road. In the same way, under the new 20mph legislation, local councils can use their local knowledge to retain a 30mph limit where there is a case for doing so. These 30mph roads will be marked by signs in the same way that variations from the current default speed limit are used.

The benefits of reducing speeds are becoming recognised in other parts of the world. 120 countries from across the world signed the Stockholm Declaration on Road Safety in 2020, agreeing that reducing the speed limit to  20mph will improve road safety. In 2021 Spain set speed limits in urban streets to 30km/h (equivalent to 20mph) and now other European countries have 30km/h limits for most of their urban/village roads. Closer to home, areas like central London, half the largest 40 urban authorities in the UK and whole rural councils like the Scottish Borders, Lancashire and Cheshire West and Chester have already made 20mph the default speed limit for residential streets. Oxfordshire and Cornwall are also introducing a county-wide 20mph limit for such roads.

The Senedd passed the legislation to bring in the new default speed limit across Wales by an almost two-thirds majority. From September 2023 approximately 35% of the roads in Wales (by length) will become 20mph. This will arguably be the biggest change to Welsh roads since the wearing of seatbelts was made compulsory in 1983. It is a change, but over time like wearing a seat belt in a car, adapting your driving to the new speed limit will become as natural as driving at 30mph is now! 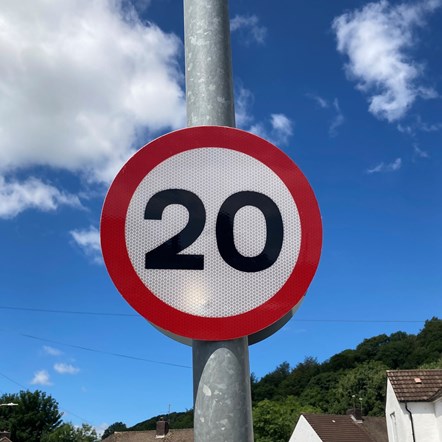