As the new Chief Scientific Adviser for Wales, Professor Badyal will provide science advice to the First Minister and Welsh Ministers.

He will also be responsible for developing the Welsh Government’s science capability and supporting the growth of a strong and dynamic science and research base in Wales.

Professor Badyal is currently Professor in the Department of Chemistry at Durham University. He is renowned for his pioneering research on the functionalisation of solid surfaces and deposition of functional nanolayers for technological and societal applications.

“I am excited to be given this opportunity to contribute towards building a high-skill, high-tech economy, helping to bring positive impact and well-being for the people of Wales.

“The Welsh Government is committed to ensuring Wales is a nation where science, research and innovation are supported and done well. I look forward to working with him to achieve that ambition.”

Professor Badyal, who will take up the role in February 2023, replaces Professor Peter Halligan, who retired from the role in 2022.

Jas Pal Badyal was awarded BA (1985) and PhD (1988) degrees from Cambridge University, where he subsequently held a King’s College Fellowship and the Oppenheimer Fellowship. In 1989, he moved to Durham University to take up a lectureship and was promoted to Full Professor in 1996. In 2016, he became an elected Fellow of the Royal Society (FRS) – UK and Commonwealth National Academy of Sciences.

He is internationally recognised for his pioneering research on the functionalization of solid surfaces and deposition of functional nanolayers. Jas Pal has invented a wide range of novel surfaces for technological and societal applications. These have been underpinned by the investigation of fundamental mechanisms and scale-up.  Examples include: antibacterial, fog harvesting, catalysis, non-fouling, optochiral switches, filtration, biochips, super-repellency, and nano-actuation. 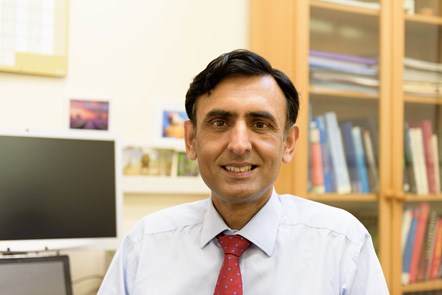