On Friday 20 August, a team of creatives, including partners from Wales, will launch ‘Fix Up The City’ - the first ever city-scale, immersive Augmented Reality (AR) experience based on the iconic duo Wallace & Gromit – which can be experienced in Cardiff, San Francisco and Bristol.

The new augmented adventure has been created by multi award®-winning animation studio, Aardman, and Fictioneers: which is a collaboration of partners including Newport-based Tiny Rebel Games, Potato (part of the AKQA network), and Sugar Creative.

The activity, funded by UK Research & Innovation (UKRI), follows Fictioneers’ successful launch of The Big Fix Up earlier this year. The project also received support from Welsh Government via Creative Wales. Creative Wales is a Welsh Government internal agency that supports the development of the fast-growing creative industry in Wales, focused on developing and promoting growth across the Screen, Digital, Music and Publishing sectors.

Creative Director at Tiny Rebel Games (a co-founder of Fictioneers), Lee Cummings, said: “We are so excited to launch Fix Up The City this summer. It’s an experience that puts these cities at the forefront of city scale augmented reality experiences. This project has enabled us to unleash our full ambition and capabilities harnessed during the development of The Big Fix Up...”

Welsh Government Deputy Minister for Arts and Sport, Dawn Bowden, said: “This is such an exciting initiative - and I’m delighted to see an innovative and creative project also acting as an economic boost for the city. Being alongside Bristol and San Francisco really does put Wales’ creative credentials on the map.  We look forward to seeing people enjoying Wallace and Gromit adventures over the summer.”

Cabinet Member for Culture and Leisure, Cllr Peter Bradbury, said: “Cardiff’s digital and creative sector is one of its strengths, and Cardiff Bay is one of the city’s prime tourism destinations, making it the perfect location for what promises to be a fantastic experience for visitors from across the region, and beyond.

“The augmented reality technology behind this interactive adventure will transform the area into a family friendly story, full of twists and turns, acting as a real draw for visitors, and a boost for the city’s economy as we continue to recover from the impact of the pandemic. There’s a world-class team working on this project, and we’re delighted to be chosen alongside Bristol and San Francisco, as one of only three city’s worldwide to be hosting this unique event.”

Fix Up The City, starring Wallace and Gromit uses the power of AR and hyper-precise digital scanning to transform the cities Bristol and Cardiff, UK, and San Francisco, into a virtual stage. The Cardiff experience takes place in and around Mermaid Quay in Cardiff Bay.

The game, which will take approximately one hour to complete, will involve fun, engaging, large-scale AR experiences that will play out before fans in a never before seen way. Interact with Wallace’s famous rocket, watch Gromit take off in his iconic plane - and even battle a colossal cleaning robot!

Available on iOS and Android smartphones in the UK, the ‘Fix Up the City’ app is available to download from 20 August and free for a limited time.

You can watch the teaser clip here and for more information about the Cardiff experience visit www.thebigfixup.co.uk/fix-up-cardiff.

Creative Wales is a Welsh Government internal agency that supports the development of the fast-growing creative industry in Wales. We focus on developing and promoting growth across the Screen, Digital, Music and Publishing sectors, positioning Wales as one of the best places in the world for creative businesses to thrive.

Our organisation continually invests in developing infrastructure and creative businesses, whilst building on continued success, identifying opportunities and actively promoting diversity and equality across the industry.

We are passionate about supporting home-grown talent and attracting international creative projects to Wales.  In doing so, we are strengthening the industry in the long term and creating exciting opportunities for future generations. Follow us online @welshgocreative. 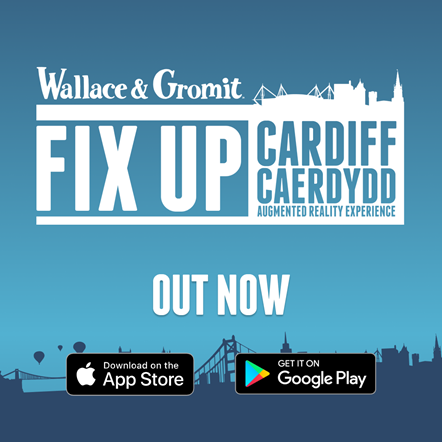