Eluned Morgan, Wales’ Minister for International Relations and the Welsh Language and Nadine Girault, Quebec’s Minister of International Relations and La Francophonie, used their first meeting to sign a declaration of intent which, among other things, is aimed at intensifying Wales and Quebec’s relationship through their joint participation in activities related to the economy, innovation, culture and education sectors.

Both ministers wish to increase trade by promoting access to markets and supply chains, as well as by bringing forth initiatives favoring business growth and investment opportunities for both Quebec and Wales.

In recent years, Quebec and Wales’ strong wish to intensify their economic ties have led to the opening of Wales’ very first representation in Canada in 2018, in Montreal. The Welsh want to strengthen their relationship with Quebec in order to diversify their international partnerships.  Minister Morgan’s visit also stems from the Welsh government’s first international strategy, which was launched in January 2020.

“Quebec and Wales have enjoyed a great relationship for over 10 years. The declaration of intent being signed today is proof that our alliance is firmly established, and I am delighted with this new development. Some Quebec companies are already well ensconced on Welsh territories and the synergies between our two economies are unmistakable. I would also like to highlight the exemplary boots-on-the-ground work of our Government Office in London, which has helped take this cooperation to the next level.” 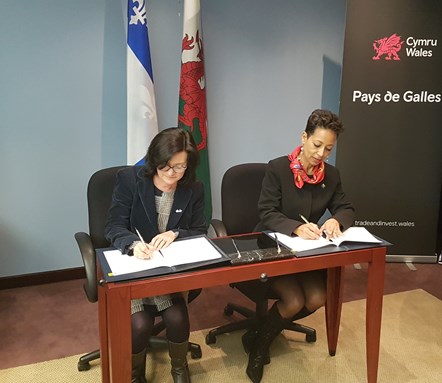