Work on the A55 Aber to Tai’r Meibion improvements is set to begin in late March, North Wales Minister Ken Skates will announce today [Thursday, 27 February].

Work on the A55 Aber to Tai’r Meibion improvements is set to begin in late March, North Wales Minister Ken Skates will announce today [Thursday, 27 February].

The £29m scheme is part of an unprecedented £1bn package of improvements in transport and road infrastructure across North Wales over the next 10 years.

The scheme will improve safety along a 2.2km stretch of the carriageway by removing direct accesses off the A55 as well as removing eight gaps in the central reservation which currently allow slow moving agricultural vehicles to cross the A55.

These will be replaced by a combined access road and active travel route between Junction 12 and 13.  The scheme will also reduce the risk of flooding in the area by providing an improved drainage system.  Accelerated advanced drainage work was carried out here in 2017 which has already delivered improvements.

To minimise disruption, as much work as possible will initially be completed off the A55 including the construction of the 1.3km combined access and active travel route. Temporary traffic management will then be installed in the autumn following the summer roadworks embargo for the A55 works. Four lanes of traffic will however be maintained during the daytime and construction is programmed to be completed by the autumn of 2021.

Ken Skates said: “Today I am announcing my intention to award the contract for the design and construction of the A55 Aber Tai’r Meibion scheme which will enable works to begin in late March

“This scheme will deliver real improvements to safety on this section of the A55 and provide further protection against flooding in the area, boosting the carriageway’s resilience against the threat of climate change.

“These improvements are part of wider programme of investments in transport across North Wales which we will see over the next few years, in order to improve resilience and provide an integrated transport infrastructure.

“I will also be visiting the site of the £135m Caernarfon and Bontnewydd bypass today which is one of the largest infrastructure projects currently under way in North Wales, which will bring major benefits to the local economy in North West Wales while easing congestion and improving the quality of life in local communities.

“Later today I will also be visiting Rhos Point active travel scheme in Rhos on Sea.  We have awarded £766k to Conwy CBC for structural work at the beach to allow widening of the existing footway. This scheme will plug a missing link in the National Cycle route no. 5 in a popular location for cyclists and which is busy with pedestrians and car traffic.

“As well as beginning work on the A55 Tai’r Meibion scheme I also plan to publish draft orders for the A494 Dee Bridge project, consult on options for the A483 Junctions 3 to 6 improvements and hold public information exhibitions for the Flintshire Corridor improvement this spring

“To deliver a truly integrated and multi-modal transport infrastructure for North Wales we are investing across the board in the areas we have responsibility for, including new services and routes for our trains, responsive bus trials and road schemes to ease congestion and improve access for public transport.

“I call on the UK Government to also play their part and match the Welsh Government’s unprecedented investment in transport in the region.  It is high time that the North Wales coast line, for example, receives the attention and investment it deserves and is electrified.”

Following the awarding of the contract there is a 10-day standstill period. 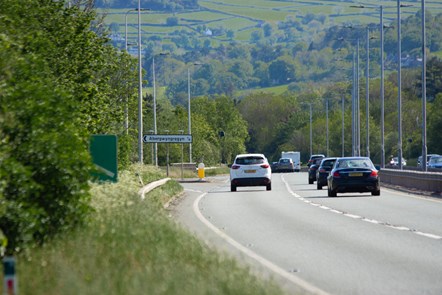